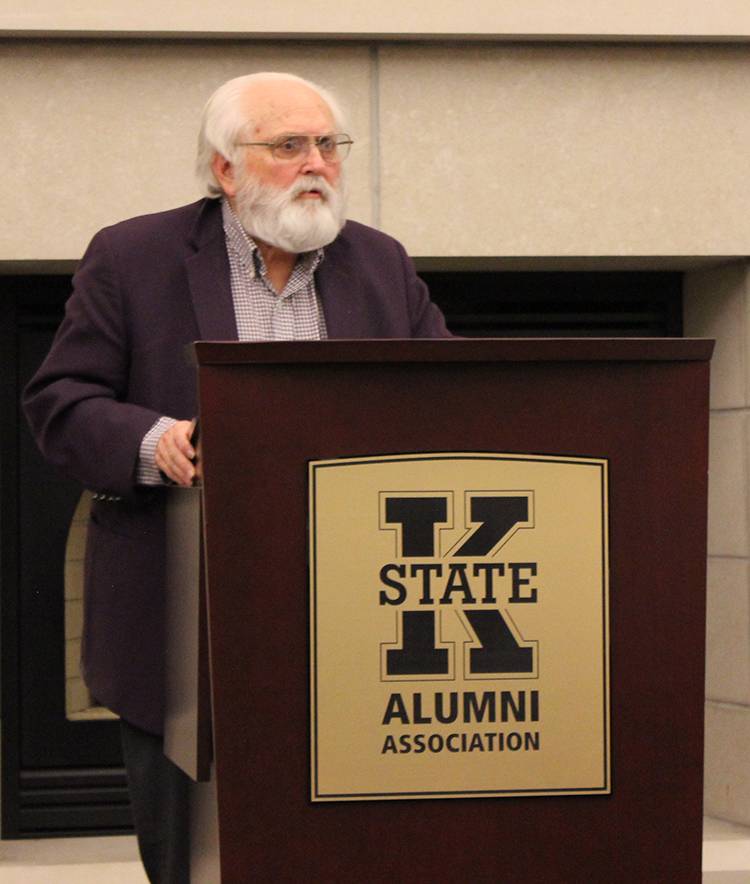 Dr. Barry Flinchbaugh, an economist who influenced decades of U.S. farm policy and thousands of students and farm leaders, died Nov. 2 in Topeka, KS. His doctors indicated the cause of his death as a malfunction of his pacemaker, according to his family. He was 78 years old.

There are a lot of different and talented agricultural economists in this country. But Flinchbaugh was unique in his style, his colorful stories and his convictions. If you ever met him, you wouldn’t forget him.

“While Barry was well-known for his contributions to U.S. agricultural policy, Dr. Flinchbaugh also had a great passion for teaching and his students,” Dr. Allen Featherstone, Agricultural Economics Department Head, said. “He continued to teach his Ag Policy course via distance this fall. He will be deeply missed and leaves a big hole in the Agricultural Economics Department that can’t be filled with someone of his knowledge and wit. Our hearts go out to Cathy and his family.”

As a professor and extension educator, Flinchbaugh taught agricultural policy subjects to approximately 4,000 undergraduates and, as a much sought-after speaker, lectured at farm meetings around the country. Most recently, he served as professor emeritus, department of agricultural economics, at Kansas State University, where he joined the faculty in 1971.

"He was always able to look at complex numbers and develop a narrative around those numbers that helped everyone understand the policy and the implications — whether it was the farmer, the elected official or the person in the White House," noted Mike Torrey, principal and founder of Michael Torrey Associates and a former student in Flinchbaugh's farm policy class.

“I drove him around to every county in Kansas when he educated farmers on how use-value appraisal would work. It was complicated, but Barry’s style made it so farmers could understand it,” Armstrong recalled. “From that effort, ag organizations took hold of their now educated membership and got urban candidates to support a change to the Kansas constitution which has saved farmers untold millions.

“His plain speaking style is what made him a necessary force in Kansas ag policy and in turn his talents were used nationally with Freedom to Farm. Outspoken? Certainly. Effective? Definitely, yes.”

Students flocked to Flinchbaugh’s classes and many remember his style as tough but rewarding. He frequently chewed on a cigar and in later years, took pleasure in stomping his cane at his side to make a point.

“The truth was that Barry’s ‘bark was worse than his bite’. He would challenge and sometimes even scare students. But once they became amiable to working and understanding, he would bend over backwards for them - not only in their studies but helping them with their lives and finances. In short, his heart was bigger than his bravado,” Armstrong added. “He told me many times, ‘put humor into teaching and students will remember….that’s the goal.’”

During his early professional years, he began working with leaders of both political parties on federal farm bills. On a national level, his contributions to the development of U.S. agricultural policy have included serving as chairman of the Commission on 21st Century Production Agriculture formed by the 1996 FAIR Act (also known as the Freedom to Farm Act).

Dana Brooks, the CEO of the Pet Food Institute, said she first met Dr. Flinchbaugh when he chaired the 21st Century Ag Commission in 2000. She was a new staffer on Capitol Hill.

“I was mesmerized by his intelligence, personality, leadership and commitment to agriculture. When I started looking at graduate school programs, I picked Kansas State University because of their reputation and Dr. Flinchbaugh was an advisor to the program. He will always be larger than life in my memories.”

Some of Flinchbaugh’s speeches and comments created controversy. Gregg Doud, who is now the top agricultural adviser for the U.S. Trade Representative, remembers walking across the Kansas State campus during his freshman year when the American Agriculture Movement hung a Flinchbaugh look-alike in effigy. They were upset about comments Flinchbaugh had made about whether or not there were too many farmers in 1985.

“I remember thinking, ‘who is this guy?’” Doud recalled. “He taught me never to back down.”

Many government leaders shared their memories of the impact he had on policy, as well as them personally.

“Franki and I are deeply saddened by the news of Dr. Barry Flinchbaugh’s passing. Dr. Flinchbaugh was nothing short of a legend in his field. His expertise made him one of the most coveted and trusted advisors for agricultural policy for decades," noted Senate Agriculture Committee Chairman Pat Roberts. 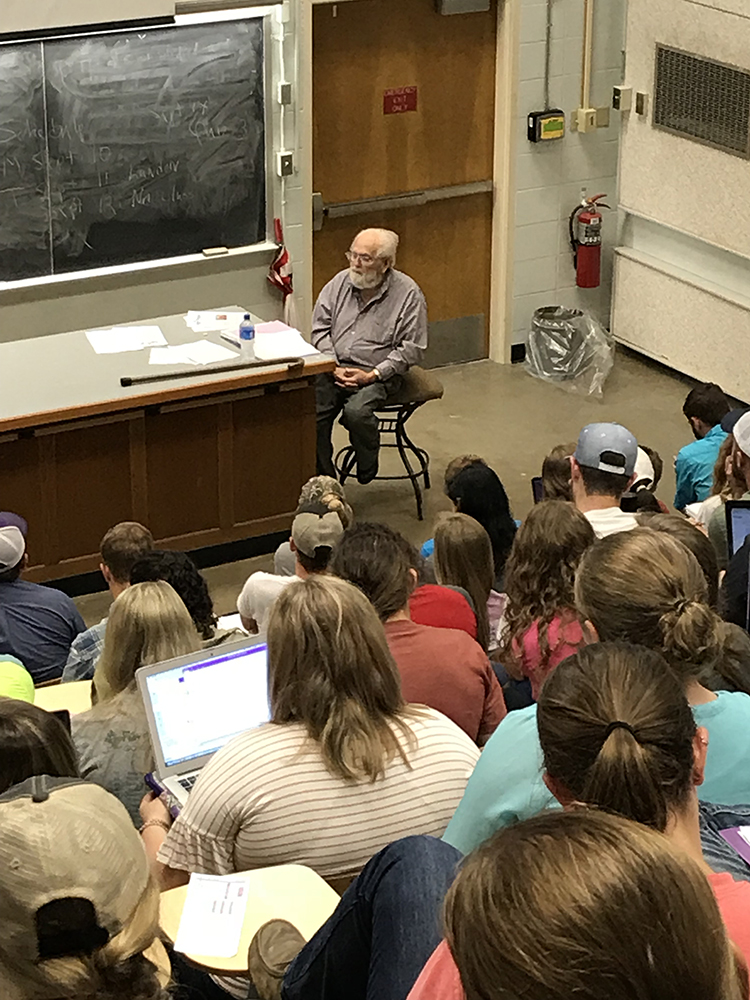 "Dr. Flinchbaugh’s legacy as an educator and advocate will live on through his work at Kansas State University and his lifetime of dedication to agriculture. I will not only miss his guidance, but I will also miss his friendship, wit and humor. I have many special memories of Barry, in particular our times together on the “Pat and Dan Show,” where he moderated lively discussions between former Congressman Dan Glickman, our state agriculture groups and myself. Our prayers are with the Flinchbaugh family during this difficult time.”

Glickman, who served as Secretary of Agriculture from 1995-2001 and appointed Flinchbaugh to the Commission on 21st Century Agriculture, said “there will be a little bit of Kansas history lost,” when he learned that Flinchbaugh had died.

“He has been my mentor for decades and will be fondly remembered for his wit, his wisdom and irreverence,” Glickman said. “He was one of the most unforgettable characters I’ve ever met.”

U.S. Senator Jerry Moran, said, “There may be no Kansan whose company I enjoyed more.” But before getting to their remembrances, it might be nice and surely fun to recall the directness, wit and insight Dr. Flinchbaugh provided whenever he spoke. Here is a Sampler of Flinchbaughian Rhetoric (excerpted from his keynote speech to a Kansas Commodity Classic audience in January 2018).

Flinchbaugh went on to serve on a variety of boards of directors such as the Farm Foundation, advisory organizations like the 25x’25 Alliance and national task forces, providing input on domestic food and agriculture policy and serving as an advisor to industry and government leaders.

Flinchbaugh has been honored with Outstanding Teacher Awards three times by Kansas State University and has been recognized by the agricultural industry with several honors. He received a Distinguished Service Award from the American Farm Bureau and recently was selected as one of Farm Credit's 100 Fresh Perspectives, a national recognition for leaders making positive contributions to agriculture and rural communities.

Flinchbaugh is a lifetime member of Penn State's Alumni Association, its Ag Alumni Society and its alumni Stockman's Club.

He and his wife Cathy raised three children: David (deceased), James, and Katherine. He is also survived by two grandchildren: Henry and Piper.

There will be a private family burial and then a celebration of Dr. Flinchbaugh’s life scheduled sometime after the pandemic is over. The family suggests that memorials be sent to the Kansas State University Foundation for the Flinchbaugh Agricultural Policy Chair (Account O64415), the Flinchbaugh Agricultural Policy Student Scholarship (Account O64410) or given to a charity of your choice in Barry's name. The Kansas State University Foundation is at 1800 Kimball Avenue, Suite 200, Manhattan, Kansas 66502-3373.

From the desk of Allen Featherstone